The Slim Hero is a low profile cooler that can accommodate CPUs with a maximum TDP of 136W. 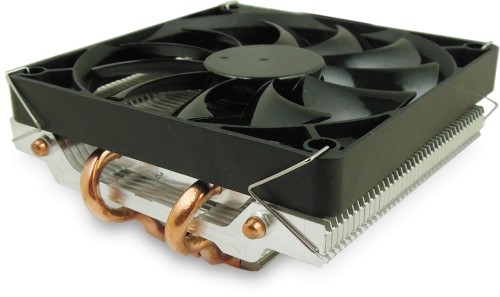 The SlimHero features four sintered power heatpipes with a very quiet slim 120mm fan. The copper heatpipes ensure maximum heat transfer from CPU to the aluminium fins. The heatsink is built in a unique shape to lower the air flow resistance. The cooler can be mounted in each direction on the AMD™ socket.

The low profile cooler SlimHero is especially designed for compact PC cases where space is limited. With a total height of only 59mm, this cooler can fit almost all smaller cases and can cool up to 136W (TDP).

The heatsink is bundled with a very quiet slim 120mm fan which provides high airflow. The fan comes with an intelligent PWM controller which allows users to set the fan speed in their BIOS accordingly.

Please check your motherboard with the restriction drawing of the cooler.

Enough clearance for RAM & CPU power (4/8 pin), but remember to connect CPU power cable BEFORE fitting cooler!!! The mounting is not the flimsy plastic type, but does require access to back of mobo, no problem if new build or you have a cut out.

I've been meaning to replace my linux computer for some time now (it was starting to get noisy). Each time I looked for quiet components, quietpc was always on the first pages of google, to the point that it seemed spammy. Either they had the best SEO guys or maybe an actual good product. Anyway - I looked at the components they suggested, did the math and it wasn't worth it (at all) to buy them and assemble the computer myself. I did that a couple years ago and the times of easy assembly are gone - it really takes some time to install all this copper. So well, I finally placed an order. A nice computer, with no SSD or HDD because I wanted to just plug what I had from the previous machine (yes, in linux you can do that and it usually works, no drivers issues as would happen in Windows). It arrived via UPS after a week or so. I plugged the SSD+HDD (took me around 30 minutes, because these non-standard cases require around 12 screws to be removed, then you need to be careful with the disk tray, there isn't a lot of room for cables...), powered it on, and it worked right out the box. So now, a week later, my silent computer has been running for a week 24x7, no issues whatsoever, other than the fact that I can hear the HDD. No fix for that I guess, until they sell 2 TB SSD at a reasonable price. Only very minor issue is that there was a bit of dust inside the computer when I opened it.
(Review via Trustpilot)