The MicroQube Gamer is housed in the Thermaltake Level 20 VT micro-ATC chassis, which is diminutive but offers the advantage of being able to accommodate full sized graphics cards, as well as tempered glass panels. 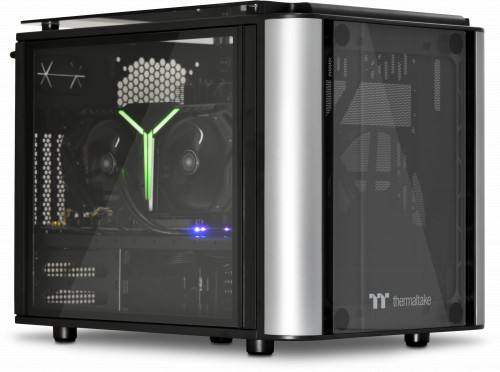 The MicroQube Gamer offers an unbeatable blend of style and substance. Standing just 348mm tall, the MicroQube can accommodate a graphics card up to 350mm in length and up to six storage drives. It uses a choice of two conventional fully-featured micro-ATX motherboards. And because we offer the latest power-frugal processors, it is cooled with a noise optimised CPU cooler, that provides adequate cooling without unwanted noise.

Thanks to the unique layout of the Level 20 VT chassis the PC is split into chambers. The top chamber houses the motherboard, along with all the devices you care to connect to it. The second chamber sits directly below the motherboard where the not so attractive (but still essential) components sit like the power supply and spinning hard disk drives. There is space for three 2.5” drives on the side of the chassis if you wish them to be viewed from the outside of the chassis.

MicroQube Gamer is surround by 4mm tempered glass panels (apart from the rear and the floor), this gives an unobstructed view into the chassis allowing for some elaborate builds. To keep temperatures down the chassis is supplied with a 200mm fan at the front. This not only provides the system with plenty of cool air but more importantly (from our point of view) it does this with very little noise, in fact Thermlatake specify it only produces 13 dBA! So when paired with a Noctua CPU cooler and one of the quiet power supplies in the configurator below, you’ll have one of the quietest gaming PCs currently available, especially during the non-gaming quiet periods!

This PC takes advantage of Intel’s latest CPUs, which have broken the mould as they now feature more cores and threads compared to previous generations. The Core i3 now features four cores, the Core i5 six cores, the Core i7 has either six or eight cores and the Core i9 is eight cores, which is a significant increase over the 7th gen processors. As well as an increase in core count, the amount of threads for each CPU has also gone up, meaning more multi-tasking can be achieved. These additional cores and threads really make the Intel’s latest CPUs a great performer. For example, the Core i3 8300 CPU is now equivalent in terms of performance to the 7th Gen Core i5 7600 but costs significantly less - giving you more performance for less money.

When specifying your new PC’s storage options using our system configurator below, you will be offered a choice of drives which vary by price and capacity. There are two primary types of storage. A conventional hard disk drive (HDD) offers huge storage capacity for a low price, but it won’t be especially fast and it will generate a certain amount of running noise since it contains a constantly-rotating spindle. A solid state (SSD) or a M2 drive on the other hand, offer tremendous speed and absolute silent operation, but they cost more than an HDD for any given capacity.

Quiet PC be quiet A600 Desktop

“10/10 Would recommend without reservation”

“Recently ordered a bespoke silent PC from quietpc.com. It is stunning. So fast, it’s a wonder it didn’t leap out of the box on arrival. Utterly silent, you could hear a proverbial pin drop. A Rolls Royce for the price of a Lexus.

Quietpc.com’s customer service was on a par with that offered by Lexus too. Anyone who has had that pleasure/privilege will appreciate just what a compliment that is. You go to them with sky high expectations, and still they exceed them.

10/10 to quietpc.com. May they go from strength to strength. Recommended without reservation.”