This clever little card allows you to connect multiple Thunderbolt devices in a daisy chain configuration to your PC. Alternatively, it can accommodate up to four full HD monitors. 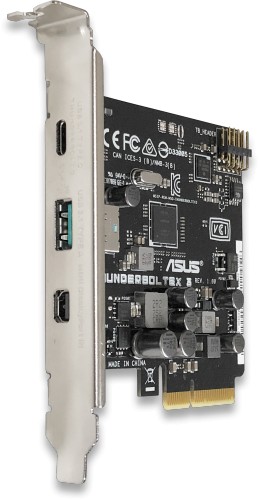 The ASUS Thunderbolt EX 3 PCIe card adds Thunderbolt 3 compatibility to your PC allowing you to achieve breathtaking file transfers of up to 40Gbps, which is twice the speed of Thunderbolt 2 and four times faster than USB3.1. The Thunderbolt 3 / USB3.1 Type-C port is also capable of outputting a display signal meaning you can daisy chain up to four monitors at 1900 x 1080 resolution.

The card allows for multiple devices to be connected by daisy chaining them together. The image below shows just what is capable with Thunderbolt 3 connectivity. It shows six Thunderbolt devices and a single 4K display, all connected to the single Thunderbolt port. Please note that each device requires Thunderbolt in and out ports and the necessary cables to allow them to be daisy chained together.

“I’ve used Quiet PC a number of times and not had a problem. I believe the real test of a firms’ customer service is when things go wrong and what is done about it. I bought a motherboard from them that refused to take more than two memory sticks (got stuck in boot loop if more than 2 sticks inserted).

On reporting the problem, I was answered by a human being and not a machine, it was easy and painless to contact the correct department, as given on their web site. We tried a number of ways to fix the M/B that did not work and Andy Ford (their technical support man) agreed the board was faulty. The very next day a new board appeared at my door by courier where we exchanged the faulty board for a good one.

A week later this board developed a problem in that the onboard LAN ceased to work. I again contacted Andy and it was basically a repeat of the earlier experience and within 24 hours I had a new and working board. It has now been just over 2 weeks since I received the 2nd board and all is well.

Credit is due to this company due to it’s fair and professional treatment of it’s customers, a big well done to them.”